Makerere University School of Public Health through the METS program is implementing a pilot of HIV Case Based Surveillance. During this implementation a number of interventions have been implemented. Key among these are Viral load monitoring of clients on ART, roll out of EID & UgandaEMR in all facilities providing ART and rolling out of fingerprint technology in 8 facilities. METS is mandated to work in close collaboration with Ministry of Health (MoH) which provides technical guidance on the implementation process of case-based guidance.

Furthermore, the facilities with fingerprint technology (unique identification) now have interlinked Implementation hence clients that move from one facility to another will now be tracked by the different facilities creating a situation of harmonised service provision to the client. The system also provided for use of National Identity Numbers for clients whose fingerprints could not be captured. These options will inevitably make it easier to accurately monitor the clinical progression of HIV positive patients longitudinally.

The CDC team led by Dr. Jennifer Galbraith visited facilities using Unique identifiers in the UgandaEMR in Bunyangabu and Kamwenge districts with the main objective of monitoring progress and provide technical assistance in existing gaps. The visit was intended to enable CDC and MoH officials appreciate the progress in the implementation of case-based surveillance and particularly the fingerprint technology and facility interlinkage. Other members of the visitation team included Kenneth Musenge and Dr. Herbert Kiyingi from CDC Uganda and the demonstration facilities included Kibito HCIV, Yerya HCIII (in Bunyangabu District), Kamwenge HCIII and Padre Pio HCIII (in Kamwenge District)

The team also paid courtesy visit to Dr. Richard Obeti, the DHO Bunyangabu, who thanked CDC for investing in district health systems strengthening because the district had benefited immensely. He pointed out the fact that, through METS, health centres that previously had no computers were fully furnished with a working desktop and staff were continuously trained on how to use the UgandaEMR. The facilities that didn’t have power sources had also been equipped with Solar systems that not only powered the computer but the maternity ward as well. “These contributions are greatly appreciated,” he said. 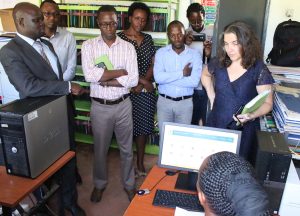 He noted that the UgandaEMR system had eased client management at the facilities and as of end of May 2018, Kibito HCIV where 89% of their clients in the system, were identifying clients using the Fingerprint technology. This unique identification had been embraced by the clients because it was evident that it had facilitated a faster queue at both Yerya HCIII and Kibito HCIV.

Dr. Robert Biira the Medical Officer at Kibito HCIV hailed the system due to several advantages it came with and the clients were complacent because they had seen how it has improved the service delivery. Among the advantages of the system, Dr. Biira pointed out that the system had helped to manage retention since it made follow up much easier and clients who missed sessions could now be called since a missed appointment list was now automatically generated.

He also noted that the system now enabled generation of monthly and quarterly reports like 106 which was previously a challenge. In addition, the system helps the facility staff to know the active clients in care hence they were able to know what logistics to order.

The system also provided for Assisted Partner Notifications (APN) which allows the health facility staff to have access and follow up with the client’s partner.

Given the working model, Dr. Galbraith expressed confidence in the idea of rolling the unique identifier model to not just the neighbouring districts but to the rest of the districts. This was due to the fact that it worked to clean the data of people who were still on treatment as well as enabled the people get better care.

Regarding the future upgrades and improvements to the system, Dr. Edgar Kansiime, the Coordinator CBS at METS Program, noted that the following would be incorporated: 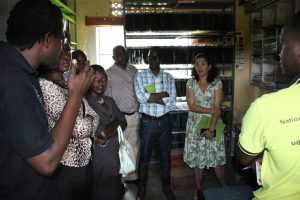 Linkage of the lab to the records room to reduce backlog data entry and a harmonised system.

Training of more clinicians so equip them with skills of entering real time data reduce of information being piled up.

He noted that with these steps incorporated in the system, they would arrange to invite all Implementing Partners and more MoH officials for a demonstration