Numerous PrEP Clinical trials have shown that oral antiretroviral (ARVs) containing tenofovir disoproxil fumarate (TDF) or tenofovir/emtricitabine (TDf/FTC) used by HIV-negative individuals to prevent HIV acquisition, called oral Pre-Exposure Prophylaxis (PrEP), are safe and effective in several populations. Prior modeling work suggests that oral PrEP is most cost-effective when targeted to populations at high risk of infection including sexually active adults – people who have unsafe sexual contacts and people who engage in injection drug use, with risk dependent on a combination of individual behavior and epidemic contexts. In November 2015, WHO expanded its recommendation on PrEP use from key populations (i.e., Men who have Sex with Men) to all populations at substantial risk of HIV infection and countries have begun implementing PrEP as part of prevention programming since then including Uganda. WHO further emphasized that PrEP should be an additional prevention choice in a comprehensive prevention package of services. People on PrEP take ARV pill every day and must also agree to see their healthcare provider at least every three months for follow-up testing. Those taking PrEP are still at some risk of contracting HIV when they do not take PrEP consistently and people on PrEP remain at risk for other  sexually transmitted infections.

Background to METS support for the PrEP program

METS was mandated to support M&E and quality assurance for PrEP services at the 2 pilot sites in Uganda; Kasensero HC II in Rakai District and the Most at Risk Population (MARPI) Initiative clinic at Mulago National Referral Hospital. This support included development and supporting reporting systems for PrEP service delivery.

METS worked closely with MoH to develop data collection tools; pre-PrEP and PrEP registers, eligibility and risk assessment tool for PrEP, KP classification tool, among others. It supported the printing of the registers and client forms and spearheaded the piloting of these tools at Kasensero HC II and MARPI clinic. The tools are currently being used at the 2 pilot sites and ready for roll out to the new COP 17 PrEP sites (Lyantonde Hospital, Kibiito HC I and Kagote HC III). METS also supported the sites to develop a PrEP client flow chart, standard operating procedures and service delivery guidelines. Also METS reviewed the data that had been collected and supported the 2 pilot sites to report at APR17 (FY17 Q4) for the indicator PREP NEW.

Left: A sample of the printed Pre-PREP Register Right: Innocent Musoke (METS Staff) mentoring Facility staff on the use of PrEP tools 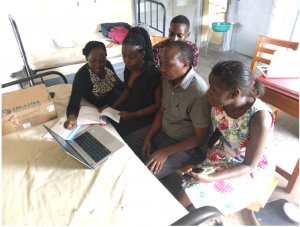 METS continued to conduct on-site and off-site follow up mentorship for staff at the 2 pilot sites in the use of the PrEP Tracker and Dashboard and supported them to clear the data backlogs that had accumulated over time. Access rights were granted to the health facility staff who directly enter data in the tracker, M&E managers and some members of top management of each Implementing partner. User accounts to enable the health facility staff to access the PrEP Tracker and Dashboard were created for the selected staff members. METS will continue to support M&E and quality assurance for PrEP services at the 5 sites in COP17.