The week of November 20 – 24, 2017, was an exciting one for the EMR team at METS where we held the first UgandaEMR developer bootcamp, aimed at developing local capability to extend and build upon UgandaEMR. The end-goal was to have 4 new HMIS forms developed to be added to UgandaEMR by the participants, while building their understanding of the platform, how it works, and the software delivery process used by the METS team.

METS is the Monitoring and Evaluation Technical Support program a 5-year Centers for Disease Control (CDC) funded cooperative agreement, started in April 2015, led by Makerere University School of Public Health (MakSPH) as prime with University of California San Francisco (UCSF) as a sub-grantee. The aim of the program is to support Uganda Ministry of Health (MoH) with Strategic Information across multiple areas, one of which being the ability to leverage electronic medical records (EMRs) as the foundation for patient centered care starting with public health facilities.

From August 2015 to February 2016, the METS team embarked on updating an OpenMRS distribution, WHO Express, which was over 6 years old installed in about 350 public health facilities, to the latest released OpenMRS version as well as the the latest HMIS tools in ART care. In March 2016, the METS team started upgrades and training on how to use the new version of the EMR in Kabarole, a district in Western Uganda, with 20 sites. In May 2016, the first National Training of Trainers was held in Mbrarara with over 150 trainees, followed by an official rebranding of the OpenMRS distribution by MoH, to UgandaEMR.

Fast forward to September 2017, when METS released UgandaEMR 2.0.0 an upgrade from the 1.x series released in 2016, using the latest long term release OpenMRS platform (2.0.5) and Java 8, which is seen as the future foundation for the next 5 – 10 years.

The key challenge faced by the METS UgandaEMR team is that new features were not being added as fast as the implementing partners, MoH program areas and end-user facilities needed. This led to the concept of a bootcamp to seed the local tech scene with capacity to develop upon and extend UgandaEMR providing a key component of sustainability for the platform, through speeding up development of health tools needed by stakeholders.

The bootcamp with 20 participants, was split into 5 days, following the principles of agile software delivery, with focus on having usable forms by the end of the camp.

To kick off the bootcamp was outlining of the expectations by the participants – most of which focused on learning about UgandaEMR, building on top of it and learning more about the software delivery process used to build the EMR.

The 4 HMIS tools to be developed in the week were introduced by a doctor from the METS team, building up an understanding of the purpose of the paper tools and how they are used within the context of a public health facility.

A parallel activity between the breaks of the tools discussion was setup of the development environment tools on participant laptops, which included MySQL/5.5, Java 8, git, maven, OpenMRS SDK, Intellij Community Edition & Visual Studio code that were to be used on preceeding days.

At the end of each day, the facilitators and participants had a “retrospective” looking at how the day went and what can be improved going forward.

The key challenge with digitizing paper records is how the paper tools are transformed to digital forms. The day kicked off with an overview and guidelines for UgandaEMR form design process at https://metsprogram.gitbooks.io/ugandaemr-technical-guide/content/form-management.html

The teams were handed pencils and paper, and with support from facilitators developed UI wireframes. After 3 hours of back-and-forth the teams were requested to show case their designs to provide feedback for each individual team but to also share learnings across all the teams.

This was the first day that the facilitators and participants delved into OpenMRS architecture and design, leveraging parts of a presentation “Health IT and OpenMRS: An Introduction”

The idea was to introduce concepts and how the medical data is coded using concepts. Once the introduction was complete, the teams re-assembled to identifying the concepts needed for their forms following searching the locations below:

The discussion and modeling of the required concepts led to interesting discussions on differing approaches to handling repeated data capture dependent on the context of usage of the concepts. In certain cases we agreed to disagree about the models which would be tackled in subsequent iterations.

This was the long awaited activity, to see the forms come to life. Based on prior experiences, all laptops had setup and configured development environments.

The process copied from OpenMRS development guide was as follows:

Once the initial form metadata was entered, with a quick primer on using HTML form entry tags, the teams worked leaving gaps where concepts were not yet defined.

The presentations were electrifying as the work for the whole week could be visualised. The approach to the team was the non-developer was to do the actual coding of the form, with the support of the team so as to slow down the “coding speed” to ensure all team members were active.

At the end of the day a working version of each team’s form was committed to GitHub and a pull request issued for progress monitoring.

This is usually the most stressful day, however to make it fun the teams took the opportunity to self-organize in order of presentation, with a . number of constraints, teams decided the order to present, with opportunities being given to team members who had not lead any presentations during the week. 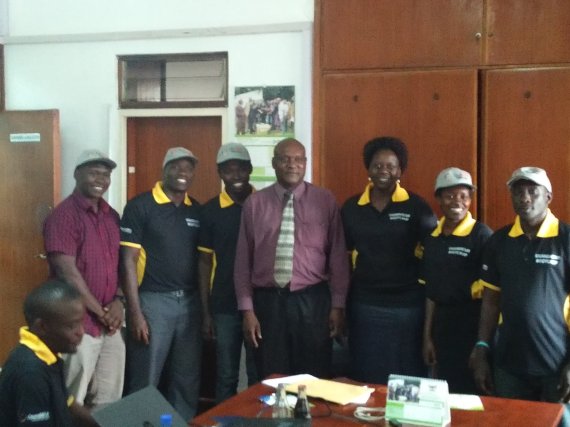 This was to give all the team members an opportunity and to force the teams to prepare for the presentations.

A winning team was selected based on their presentation style, understanding of the HTML form being delivered and progress within the constraints.

The event as seen by a little eye

Smiles and laughter to lighten up the day